Over the years, I have frequently received messages, words, and songs from the Spirit of God. Recently, during a worship time at a conference in Phoenix, I received something that I believe was to be shared with the greater Body of Messiah, and so we are posting it below for you to prayerfully consider. I hope you are encouraged and edified.

A King is coming!

I am the Beginning and the End. I have chosen you and not rejected you. I am removing darkness from you. Confusion and deception will be far from you. I have placed a robe on your shoulders and a ring on your finger, and I call you My friend. I also call you My sword; yes, for me, you are My Word made flesh.

Many have been comfortable in the sheath while singing and declaring, “I am sharp. I can discern. I can know and understand—even to the dividing of the soul and the spirit.

I ripped the curtain in two! For the glory was not reserved for just a few, but so all might see and taste and enjoy the One who calls you out of darkness into the light of My marvelous Presence. Can you hear the thunder in the distance, the pounding of the hooves of the horses? For indeed, they are coming, and a great darkness is preparing to cover the whole earth.

For it has been spoken, “it is written, and so it will be done.”

So throw open wide the doors and invite them (the strangers and sojourners) to come in, for I have prepared hearts and souls. It will amaze you. Be strong and courageous in this hour, for is it not written that the courageous will do great things?

And so, as you have heard, now is the time to believe. And in believing, do. Thus in the doing, you prove what you believe. For the King is coming—the One who was and is and is yet again to come—whose going forth is from of old, and for all eternity. It is Him that you should desire to please.

So awake and sing the song, and prophecy and anoint, and do the work of the ministry.

But now I am calling you to leave the comfort of the sheath, for now is the time for My Word to be revealed. It’s a call to a new generation! You’ve heard it said in generations past, “Don’t speak of these things; they are personal; they are private.” But don’t you know that those words were spoken by those who did not know Me?

Their silence was their sheath, their hiding place. And for generation after generation the enemy has devised systems to take away the voice of the righteous, even with the writing and implementation of laws.

But now, let the righteous arise! This is not for the meek, not for the drive-by or the occasional believer. This is not for the goats or for those who have been ashamed of My name. This is for the brave. This word is for those who have been called out of fear. For My love has destroyed their fear and caused them to be an instrument of praise. Who will declare, “I am not ashamed of the gospel?” For in that declaration, the doing of the works of My Father are evident in their hands.

Ah, but no longer! I have destroyed them all, in My name. Now you are all more than conquerors, and so I am calling you today to leave the comfort of the sheath and breathe the fresh air of the kingdom. Come to know the sound of steel on steel, where sparks fly and where kings are enthroned.

But this is reserved for those, who are not dull, whose passion continues to burn in a day when so many would say, “Be silent…take your seat!” For I am raising up a bold generation of people who know their God, and do His exploits.

For this generation is made up of generations—yes, Abraham, Isaac, Jacob, and Joseph and on and on—a violent generation, who will take hold of the kingdom by force. They will not be denied and their faith will be openly rewarded. Are you of this generation?

The dividing has already begun, and so it will continue. Darkness grows darker and light grows brighter until the full noonday when all will see His appearing.

For behold He comes, riding on the clouds, shining so much brighter than the sun, when the shofar will sound.

So lift your voice in the year of Jubilee, for soon, and very soon, out of Zion… 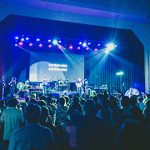 Update on Paul Wilbur’s HealthPaul Wilbur
We use cookies to ensure that we give you the best experience on our website. If you continue to use this site we will assume that you are happy with it.Ok