These two weeks have seen a massive wave of new terror attacks in Israel. There are several per day in a country about the size of Moldova, Togo, El Salvador, Taiwan or Rhode Island; depending on which continent you live. Islamic Jihad is “morphing” rapidly into new forms. This new wave is a conceptual leap, primarily in two dimensions:

In the local competition between the Palestinian Authority and Hamas, it seems that Abu Mazen wanted to gain ground in public opinion. So he came out with several blistering (and lying) accusations against Israel. These were centered on the Temple Mount issue, and were soon being sent out widely on social media. The response in social media called for every Muslim in Israel or Palestine to go out and stab Israelis.

The 30 or so attacks these last two weeks were done primarily by very young people who were not part of an organized group, but who were responding to the social media propaganda (their age was younger; they came from a social-economic class that has access to internet; had no military training; were dispersed in location).

Most of the attacks (except for the shooting against the Henkin family) have been rather amateurish, even though still deadly. A repeated pattern was: a young person with a butcher’s knife runs into a group of Israelis and starts stabbing people.

The local Israelis and the security forces are so on alert that the terrorist events last only a few seconds before the people around jump up to neutralize the terrorist. It is causing an amazing sense of alertness everywhere, all the time, by all the people. At the slightest hint of an attack, people run TOWARD the incident to help out.

On the other hand, since the terrorists are young and not part of an organized group, they pop out from everywhere. No place is safe; no moment relaxed; no situation protected; no person trusted. One news report is scarcely finished before the next attack occurs. The number of attacks is higher, and their location more widespread. This makes the defense against them almost impossible, despite heroic efforts by the security forces.

The propaganda against Israel is now focused on the Temple Mount. The tactic of blaming Israel for social injustice toward the Palestinians has lost impact, when Muslims are murdering one another by the tens of thousands in Syria, Iraq and Turkey. The only issue left that can inflame the masses is the “sacredness” of the Al Aqsa mosque (built 1700 years after Solomon’s Temple on the same location).

Jihad propaganda, reinforced by PA propaganda, is that Israel is invading the Mosque with their “filthy feet.” All Israelis know this is untrue; yet these lies are repeated endlessly in the media. The Palestinians hear just the lies. Then some of the seemingly most sincere Arab youths, willing to sacrifice themselves for the honor of their “holy place,” go out to stab any Jew in the area, since Jews are portrayed as demonic beings.

The emphasis on Al Aqsa is highlighting the religious nature of the conflict, although most news reports around the world want to avoid that fact. In some ways this religious tone undermines any possibility of finding a diplomatic solution. Diplomatic solutions are based on practical compromise, whereas religious extremism will never agree to such. The “messianic” expectations of an Islamic “Mahdi,” coming to Jerusalem inflates this conflict unfortunately to apocalyptic dimensions.

How should this massive brainwashing and uprising be dealt with? What are Israeli police to do when a 19 year old Palestinian girl pulls out a knife from under her long dress, and cries “Allahu Akhbar”? There are cameras everywhere, and all that will be shown in the media is an Israeli soldier shooting a seemingly innocent young Arab girl.

Perhaps the element that has most “stunned” the Israeli public is the misrepresentation in international news media. The Israelis see a deluded Muslim young adult, stabbing innocent Jewish civilians. On the spot the terrorist is killed while still wielding the knife. And what is reported? Simply: “Today Israeli security forces killed a young Palestinian.”

The combination of the Al Aqsa Mosque, social media and propaganda lies, are making this current uprising particularly challenging. Certainly Jerusalem has already become the “stumbling block” and “cup of trembling to all the nations” as described in the prophets (Zechariah 12, Psalm 2). 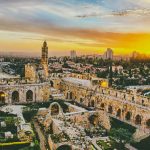